Click on the image above to view a larger version.

The picture above of snow on the pyramids is claimed to be a fake by Esquire magazine HERE, and a web site HERE, while a web site HERE suggests that it is real.  Which is it?  Real or fake?

The initial evidence of fakery seemed to consist entirely of three FACTS:

FACT #F-1: The picture seems to have been shot from the same spot as the picture below:

FACT #F-2: The two pictures seem to be tilted at the exact same angle.

FACT #F-3:  There are some KNOWN FAKES of snow on the pyramids on the Internet.

But those three FACTS didn't seem sufficient to prove it's a fake.

There are also some FACTS which say that the picture COULD BE real:

FACT #R-2:  The pyramids are less than ten miles from the center of Cairo.

FACT #R-3: The weather system that caused the snow covered hundreds (maybe thousands) of miles and buried many places north of Cairo in deep snow.

FACT #R-4: Because of the unrest in Egypt these days, tourists are discouraged from visiting the pyramids. Combined with the fact that it's winter and snowing, and since some vendors near the pyramids have become violent,  there wouldn't be hundreds of tourists taking pictures of the snow on the pyramids.

FACT #R-5:  The KNOWN FAKES were not created in the same way as the picture in question would have to have been created (IF it is a fake).

Here is some information about the known "fake" pictures of snow on the pyramids:

FRAUDS. There are other pictures of snow on the pyramids which are KNOWN to be FRAUDS.  A fraud is something that is represented as something it is not.  Example, the picture below is a REAL picture which supposedly shows snow on a pyramid:

But, it's snow on the Luxor Hotel in Las Vegas, which is shaped like a pyramid.  So, it's a real picture, but it's not a picture of the actual pyramids.  That makes it a fraud.  Here's another fraud:

The picture above is actually a model of the Sphinx and a pyramid in a park in Tokyo.  It was really covered with snow.  So, it's a REAL picture, but it's not a picture of what it is claimed to be.

Here's another shot of the Sphinx model from another angle at a different time of year:

TRICKS.  The are real pictures of the real pyramids which supposedly show them covered with snow, but it is a TRICK done in a computer by simply altering colors.  The yellow sand and granite are made white.  Example from the British newspaper Mirror and wafflesatnoon.com:

FACT R-5: The picture at the top of this blog thread did not appear to be either a "fraud" or a "trick."  It seemed that IF it was a fake, it was a true work of art "fake" piicture that someone spent a lot of time and effort to DELIBERATELY create.  They would have had to

1.  Replace the sky and get the new sky to fit perfectly around the blocks of the pyramid.
2.  Add the two men into the picture without any indication they were artificially added.
3.  Change the color and lighting on the pyramids.
4.  Remove objects on the ground to make them appear to be covered with snow (see below),
5.  Remove the shadow of the column (near the man's foot).
6.  Add a cloud haze around the top of the pyramid.
7.  Paint a layer of snow on the stone block at lower left.

Here's a larger view of the snow covered stone block in the lower left corner of the "fake" (top) and the same stone block from the real picture (bottom): This illustration shows some interesting things.

First, it shows that the area in the lower right in the "real" picture has uneven spots and debris on the ground which do not appear in the "fake" picture.  So, they would have to be removed.  Or, if the picture is real, the rough spots and debris were simply covered over with snow.

Second, if you click on the image to make it larger, you'll clearly see that the snow atop the block is not smooth.  The light playing on the surface of the snow covering shows the snow is uneven as if it is a layer of snow on an uneven surface.  That is NOT easy to create.  It's either the work of an artist, or it's an indicator that the picture is real.

"Waffles" at Wafflesatnoon.com kindly provided this color adjusted version of the real picture:

And he provided the animated GIF file below which flips between the real picture and the "fake."  His intent, presumably, was to show that the "fake" is simply a color adjusted version of the real picture.

So, I hunted for the sources for the "real" picture and the "fake" picture.  Much larger versions would allow me to make a much better comparison.

Finally, I was supplied with NEW evidence.  Someone provide a link to the web site of post-apocalyptic art HERE.  It supplied some NEW FACTS:

FACT F-5: The version of picture of the snow on the pyramids is equal in size to the largest version I have been able to find elsewhere.  It's the same size as the picture at the very top of this thread.

FACT F-6: It is all that it needed to be to convince me it was not a real picture, i.e., it is a work of art that took someone a long time to create.

So, while I was once 95% certain that the picture was real, the NEW FACTS have convinced me that the picture is a work of art that was fraudulently presented on the Internet as being a real picture.  I'm 99.99% convinced of that.  But, I'm still open to SOLID proof that shows me to be wrong again.

A COMPLICATION: There is another picture (shown below) from a web site HERE which supposedly shows snow on the pyramids.  And, it shows similar wintery clouds in the sky.  But, it also seems to have a matching picture on the Internet that does not show snow.  And, in addition to the very different sky and coloring, there are also some very subtle minor differences between the two pictures:

One of the less subtle differences is that the picture with the snow also contains a man on a white camel in the lower right corner of the picture.  The man and camel are not there in the picture without snow.

Plus, there may be some unknown reason for people to take pictures from that spot (and the other spot), since I found another picture HERE that was taken from nearly the same angle: 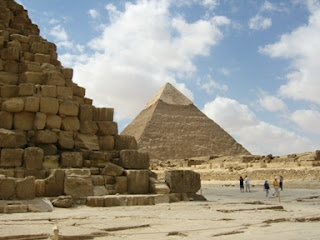 So, do the FACTS say this picture is "fake" or do the facts say it is "real"?

On January 15, 2013, someone provided me with a tool to find other versions of the picture.  Using that tool, I found this version:

It also shows the same man on the camel.  And it shows the same clouds.  And, there still appears to be snow on the ground and on the pyramid even though it is not blue color adjusted like the other version.

So, does it really show snow on the pyramids?  It doesn't seem like another "work of art."  The web page where the photo is for sale says it was taken by Andre Klaassen, but it doesn't say WHEN it was taken. However, some research find that Andre Klaassen also took the picture which doesn't show the man on the camel, and he seems to do work on manipulating images to create works of art.

So, I feel, with about 95 percent certainty, that the facts say it is a work of art,  and NOT a REAL picture of snow on the pyramids.

However, I am always open to new and better facts which solidly prove it one way or the other.