My comment for Sunday, January 27 was primarily about two posts a (former?) USAMRIID scientist made on Thursday evening to Lew Weinstein's blog and to this blog.

The two posts suggest that the scientist was contacted by a True Believer and urged to join in on arguments that Bruce Ivins was innocent and that someone else sent the anthrax letters.  The True Believer almost certainly wanted to convince the scientist that an al Qaeda agent was behind the attacks.  But, it appears the scientist has his own theory: He believes someone at Dugway Proving Grounds was behind the attacks.  OR, the lapse in security that led to someone getting a sample of the Ames strain occurred at Dugway.

I responded to the scientist's post in the Apr. 29 - May 5, 2012 discussion thread by explaining that he was wrong in his belief that Ivins didn't have the equipment in Suite B3 to make the attack anthrax powders.  I explained how easy it was for Ivins to make the powders.  Plus, there are facts which show that the spores were not made at Dugway.

So far, the scientist hasn't responded to what I wrote.  Nor did he respond to "DXer's" comments which followed the scientist's ranting post to Lew Weinstein's blog.

It's another example of a scientist who appears to be largely ignorant of the facts yet still has a very strong opinion.  I'm hoping that someday one of these scientists will want to sit down and discuss the facts to see what the facts actually say about the case.

While looking for links to add to the comment on my web site, I noticed that the publication date for Edward Jay Epstein's new book "The Annals of Unsolved Crime" has been pushed out two weeks, from February 26 to March 12, 2013.  It made me wonder if the fact that I said I was prepared to debunk the section about the anthrax attacks of 2001 caused Epstein to go back and do some rewrites.  There could easily be some other explanation, but the change in the publication date certainly has me curious.  They may have made the anthrax attacks section a bit more difficult to debunk, but anything Dr. Epstein says on the subject is still expected to be largely bunk.

Lastly, I commented on how totally worthless I am as a salesman.  I've written what I think is a terrific book, but I'm doing next to nothing to promote it.  I'm waiting for the world to beat a path to my door, even though "the world" doesn't even know I exist.  Amazon reportedly has about 1.8 million different books for sale in print form, and 800,000 on Kindle.  Without some kind of promotion, no one is going to find my book in that mass -- particularly when so many other people are trying so hard to promote other books.

But, maybe something will happen to bring attention to my book.  The review of the Amerithrax investigation by the General Accountability Office could do it.  Or maybe it won't do anything.  So, I'll probably just wait and see.

My comment for Sunday January 20 was about wandering into the realm of anarchists, where they declare:

"The most dangerous thing to you and your family is government."

I've been arguing about the anthrax attacks of 2001 with conspiracy theorists and True Believers for over 11 years, but I never before wandered into the territory of anarchists.  The big cheese in this world seems to be Alex Jones. I worry a bit about what some insane disciple of one of these rabble rousers might do, but it appears that combining the anarchists, conspiracy theorists and True Believers into a single force would be like trying to build a pedestal out of billiard balls with no common understanding to bind them together.

At least I hope that's the case.

On a less serious side, since "Joseph from Spain" seems to be a regular visitor to this blog, I'll mention that I visited Spain in October 1975, staying in Torremolinos but taking day trips to Algiers and Malaga.  Here's a shot I took of a bull fight in Malaga: 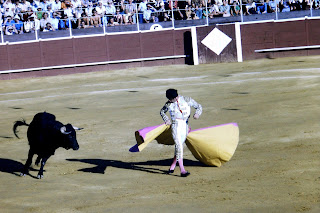 Putting this in the context of my Sunday comment on my web site, I'm hoping that the battle between the people fighting the "bull" being spread around by the anarchists, conspiracy theorists and True Believers will end the way nearly all bullfights end: 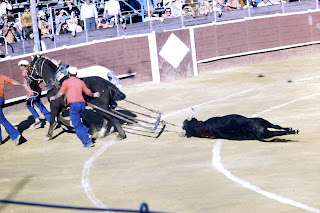 My Sunday comment for this week was entirely about Professor James Tracy and his theory that the Sandy Hook massacre may not have actually happened, but may have been a phoney event staged by the Obama administration to help institute strict gun controls.  In my comment I provide numerous links to the writings of Professor Tracy and to two hour-long radio interviews where he speaks his mind.

Professor Tracy argues that the families of the grieving victims may have been actors from crisisactors.org.

Professor Tracy repeatedly argues that because there are no pictures of hundreds of children streaming out of the school, there may have been no more than the few child actors seen in this photograph:

Professor Tracy argues that the Medical Examiner may have been an imposter, since, when he talked with the media, he didn't have all the answers to their idiotic questions and didn't even know how many boys and how many girls had been shot.

Professor Tracy also argues that the media must have been part of the conspiracy, since in their first accounts the Newtown Bee claimed they had talked with the principal of the school, yet it was later claimed that the principal was one of the first adults killed.

And he goes on and on.  Professor Tracy is a very eloquent talker, and he seemed to be on a campaign to get his beliefs reported everywhere.  It was as if he felt he could see what no one else could see, and he was out to explain things to everyone else.  I find that kind of thinking to be fascinating, and I saw a LOT of it during the past 11 years in discussions about the Amerithrax investigation.

Before I was made aware of Professor Tracy's beliefs on Saturday, I didn't have any topic to write about in my Sunday comment.  All I had was some notes about movies I saw (or didn't see) last year:

On January 1, I wrote that 2012 seemed like a terrible year for movies.  Looking at the best picture nominations for the Academy Awards, it appears that I've seen only one of the nine pictures nominated:


But all were released near the end of the year, and only "Beasts of the Southern Wild" is currently available for rental on DVD.  (Although I watched it, it wasn't my "cup of tea.")  I'm looking forward to seeing most of the rest.   Sooner or later, I'll probably watch all but "Amour."  The movie I named as the best I saw in 2012, "My Week With Marilyn," had its theatrical release in December 2011 and was nominated for two awards for that year.

I was also going to write something about coming to an end of my "poster phase."  I may or may not do one more poster.  It all depends upon what else happens.  I've got a lot of nice shots of Thailand that might make a nice poster.  Here's one of them: 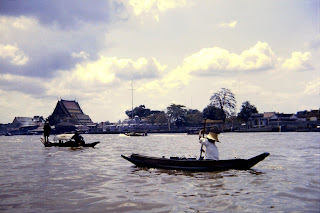 I'm also thinking of making a large copy of this picture I took of my sister and myself in 2006: 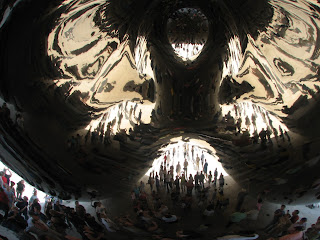 My sister and I are in the picture in four places, bottom center, top center, left and right.  Click on the image to see a much larger version.  It's a picture of our reflections in the "Cloud Gate" sculpture in a Chicago lake front park.  Here's a shot of the sculpture from a bit further away: 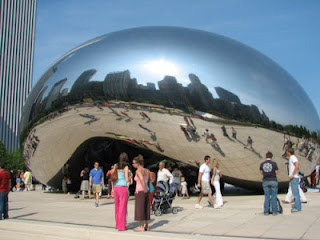 I'm still searching for a project to keep me busy now that I've finished my book "A Crime Unlike Any Other."  Writing a short book about the thinking of conspiracy theorists and True Believers is a possibility, but I'd want to quote just about everything Professor James Tracy wrote and said, which could be a copyrights problem.  So, that's probably not a good idea.

I spent most of the week working on creating posters from photos I took over many many years.  It wasn't until Saturday that I noticed an interesting post to Lew Weinstein's blog that I found an intriguing subject to write about for my Sunday comment.

I also found that in the past year three different Anthrax Truthers have referred to the fictional Lt. Columbo of the Los Angeles Police Department as some kind of model for a good detective and investigator.  "Columbo" was a TV detective show that ran from 1971 to 2003.  Lt. Columbo was played the the late Peter Falk.  I think I watched every episode, but why was that particular show so fascinating to Anthrax Truthers?

That is certainly not typical with most crime shows.  Usually, the fun of the show is trying to figure out who the culprit is before the TV detective figures it out.  On "Columbo," the fun was watching Lt. Columbo outwit a killer who continuously tried to mislead him, a killer who always thought he was smarter than the bumbling, disheveled and seemingly slow-witted Lt. Columbo.

All Anthrax Truthers believe they know who sent the anthrax letters of 2001, and they believe they know more about the case than the true-life professional investigators who worked the case.  Anthrax Truthers may not agree amongst themselves about who actually sent the anthrax, but they all know the FBI was wrong in finding that Dr. Bruce Ivins did it and that Ivins acted alone.

How do they know?  Evidently, they divine it.  It occurs to them just as if they witnessed the crime on an episode of "Columbo."  And, anyone who disagrees with them is just someone who has not seen the TV script that the Truther envisioned.  They knew who did it before the real investigators showed up on the scene. And, facts found by the FBI are irrelevant, since the script the Truthers envision has other facts which will show who really did it. They just want the investigators to look in the right place for those facts.

Can it be that simple?  The pieces certainly fit.

There probably won't be any more "Columbo" TV movies, since Peter Falk is dead and it's hard to imagine anyone else playing the role. (Someone might try, the way Steve Martin tried to play Inspector Clouseau after Peter Sellers died.)  I would like to see an show where the killer commits his crime at an amateur detective convention.  Lt. Columbo would then not only have to figure out who did it, he'd have to contend with a hundred amateur detectives trying to second guess him, all of whom have their own versions of the script in their heads, and they all know with absolute certainty that their version is the best version.

My Sunday comment also examines some bizarre beliefs that one Anthrax Truther has about "intelligence analysis."  But, you can read what I wrote there.  There's no need to repeat it here. 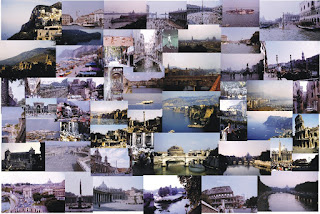 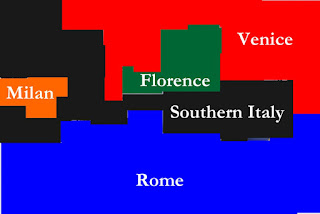 There are some terrific shots in the collage.  (Click on the pictures below to view larger versions.)  Here's one of my favorites from Southern Italy: 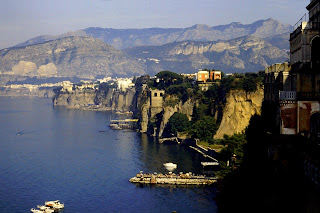 and here's one from Venice that I couldn't fit into the poster: 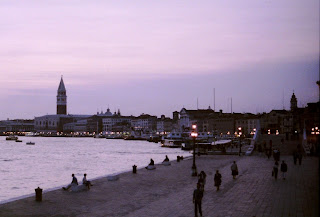 I'm trying to figure out where I took the picture below.  I think it was near Genoa, but I can't find any similar shots on the Net.  Until I can figure it out, I can't print the poster. (It looks like I may have taken the picture through the window of a bus or train.  If so, it could be somewhere between Sorrento and Venice.) 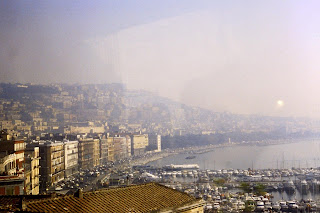